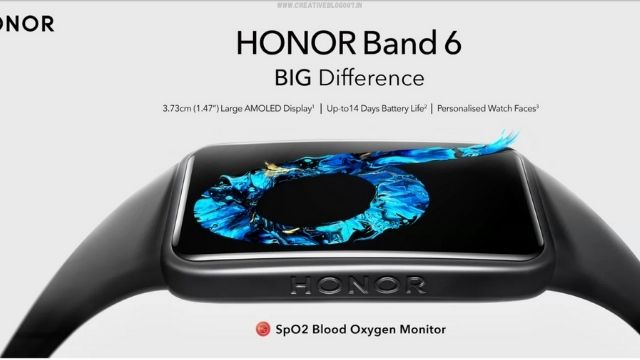 Honor already launch his previous most successful and accurate bands in India that is Honor Band 4 and 5 and Honor are move towards launching his new smartwatch that is Honor Band 6 in India very soon . The Honor band are listed on india’s most famous Flipkart e-commerce site .

The band comes with an latest features and more upgraded version as compare to Honor band 5 , ES and other models. The Honor band 6 comes with an 3.73cm large AMOLED display which is 148 percent bigger than the other traditional fitness trackers , Up to 14Days  battery life and Personalized watch faces . According to Honor this band is more accurate than other traditional trackers .

Honor Band 6 features a 3.73cm 1.47-inch Large AMOLED Display which is 148 percent bigger than the other traditional fitness trackers that gives you a phenomenal Visual experience . Honor Band 6 comes with an rectangular shape dial and has a small red button on the right edge and Honor logo on the left side . To protect from scratches and accidental falls the band comes with an 2.5D curved glass protection .

As coming towards battery the Honor Band 6 comes with an 14days battery life with normal usage and  10days with heavy usage .Honor Band 6 has better battery life and equips with magnetic fast charging to free you from long recharge times and The band offer 5ATM water resistance .

The Smart band was already launch in china in November 2020 . The band comes in two variants in Chinese market . The company selling non-NFC Band 6 with a price tag 249Yuan (Rs 2840) , whereas it is available for 49.9 Euros (Rs 4,420) in Global market  .Honor Band 6 comes with an three color option Meteorite Black , Sandstone Grey , Coral Pink.

The Honor Band 6 is listed with a Price tag of  RS 5,999 on Flipkart . But the Honor not officially announce this Band in India , the pricing may not be true .