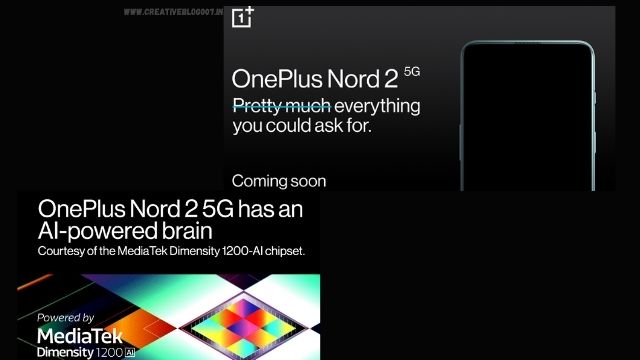 The smartphone Oneplus Nord 2 5G will be available in India through Amazon . There is separate landing page on Amazon with teasers you can see here .The only officially confirmed specs by oneplus for Nord 2 is MediaTek Dimensity 1200AI chipset but Oneplus not yet revealed all features of the smartphone officially .

Oneplus ready to launch his midrange killer performance device which is full power packed features and this smartphone is upgraded version of the previous Nord phones . The Oneplus first smartphone comes with an MediaTek Dimensity processor chipset . Under the Hood the smartphone comes with an latest MediaTek  Dimensity 1200 AI chipset . The AI Hardware on the chip will give crazy experience in Photography, lowers response time during gaming and enhance the display .

Oneplus confirmed features about the camera , Oneplus Nord 2 5G will come with an AI Photo Enhancement for stable and best photography . The smartphone is able to recognize up to 22 different scenarios and automatically adjust the color tones . Device automatically adjust the optimal setting for low light shots and Night time . For best video The Nord 2 smartphone come with an AI video Enhancement feature that enables the Live HDR-effects in real time during recording .

Thanks for reading the article till the end. For more latest , exclusive and informative tech news content follow us on Google News .