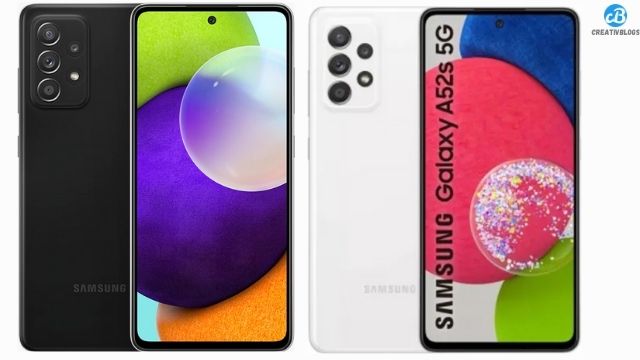 After the successful hits of Samsung Galaxy A52 in Indian market now Samsung Galaxy A52s is expected to launch in India very soon. According to the strong leaks and rumors Samsung’s upcoming smartphone A52s will launch next few weeks globally and in India also . Samsung not yet officially released about its specifications , price . Samsung A52s smartphone may comes with an Qualcomm snapdragon processor .

The Samsung’s upcoming A52s smartphone may comes with an two variants options in India ahead official launch event Samsung reveals everything about it . Lets take a look on expected price in India , specifications and other features details.

The Samsung’s upcoming A52s smartphone coming with an two variants in India . The smartphone may launch in few weeks . The smartphone comes with an  6GB RAM and 128GB internal storage , 8GB RAM and 256GB Internal storage options. The Samsung Galaxy A52s comes with four color options include Green, Purple , Blue and Black. As per the leaks Samsung Galaxy A52s will priced at EUR 400 (approx. Rs 39,100).

Coming to the lens the smartphone will comes with Quad camera setup in which 64MP primary camera , 12MP ultra wide angle camera , 5MP depth camera and 5MP Macro camera. From the front side it will comes with an 32MP punch hole selfie camera for capturing sweet selfies and for video calls .

Under the hood The Galaxy A52s smartphone will powered by Qualcomm Snapdragon 778 SoC processor paired with an up to 8GB RAM and 256GB internal storage . The smartphone runs on Android 11 based on Samsung latest One UI 3.1. according to reports and leaks The smartphone will offer expandable storage via Micro-SD card support.

It will houses 4,500 mAh battery with 25W fast charging support .The device will also comes with an bunch connectivity options include WiFi , Bluetooth v5.0 , GPS , NFC , Type C port . It will  comes with an IP67 dust and water resistant rating .

To know the exact specifications and features of the smartphone we must wait for official launch event for this Samsung Galaxy A52s smartphone.

Thanks for reading this article till the end . For more latest , exclusive and informative tech news make sure to follow us on Google News.