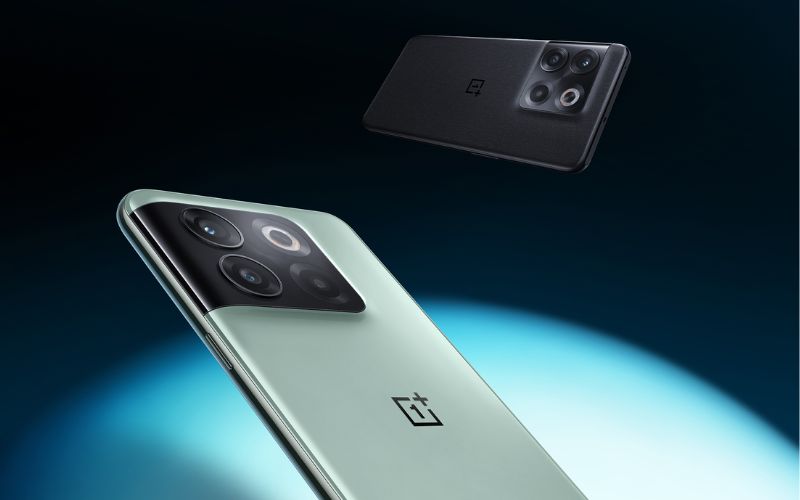 OnePlus launched its first smartphone that features Qualcomm’s latest and top-notch Snapdragon 8+ Gen 1 Processor. Also, iQOO launched iQOO 9T smartphone in India yesterday, the smartphone comes with power-packed features and there is no doubt the smartphone gives tough competition to the OnePlus 10T.

The OnePlus 10T has the same design as the OnePlus 10 Pro 5G, but there is a catch, in the OnePlus 10T, the OnePlus ditched the Alert slider and removed the sign of the Hasselblad branded camera system, We will also talk about this at the end of the article. First of all, Let’s take a look at the specifications, features, and pricing of the OnePlus 10T smartphone.

In terms of lenses, the smartphone features a triple rear camera setup on the back which is comprised of a 50MP Sony IMX766 primary camera with OIS support coupled with an 8MP ultra-wide-angle camera and 2MP macro lens. It has a center punch hole mounted 16MP selfie camera for capturing stunning selfies and video chats.

Under the hood, the OnePlus 10T is powered by Snapdragon 8+ Gen 1 Processor paired with an Adreno GPU. It packs up to 16GB LPPDDR5 RAM and up to 256GB UFS 3.1 internal storage. The handset runs on Andriod 12 based on OxygenOS 13.

Other features include an In-display fingerprint sensor, HyperBoost Gaming engine with GPS 3.0, and Ultra Thin Vapor cooling system (Eight Channel vapor cooling chamber with a VC area of 5177mm²). There is no alert slider in the OnePlus 10T smartphone. The smartphone weighs 203 grams and is 8.7mm thick.

The smartphone will available for purchase from August 6 in India via Amazon and OnePlus India’s official site. There is also a ₹5,000 initial discount on the SBI Bank cards, so the effective starting price of the smartphone is ₹44,999.

Oneplus smartphones are mostly famous for their alert slider button, but in the OnePlus 10T, there is no alert slider given by OnePlus. The Alert Slider has been a staple of OnePlus’ very flagship phones for years, the main work of the Alert Slider offers an easy and fast way to put the phone into vibrates and silents modes without having to tap through any onscreen menus.

In an email interview with the verge, OnePlus Cheif designer Hope Liu reveals why OnePlus ditched the alert slider in the OnePlus 10T. He said that ditching the slider was necessary for the OnePlus 10T to have enough internal space for other components needed for a better antenna signal and a large battery capacity. Liu also says, the alert slider appears to be a very small component, it actually has a relatively large impact on the device’s motherboard area (taking up 30mm²).

Thanks for reading the article till the end. For more latest and exclusive tech news updates follow us on Google news.